“Don’t forget to walk the dog” 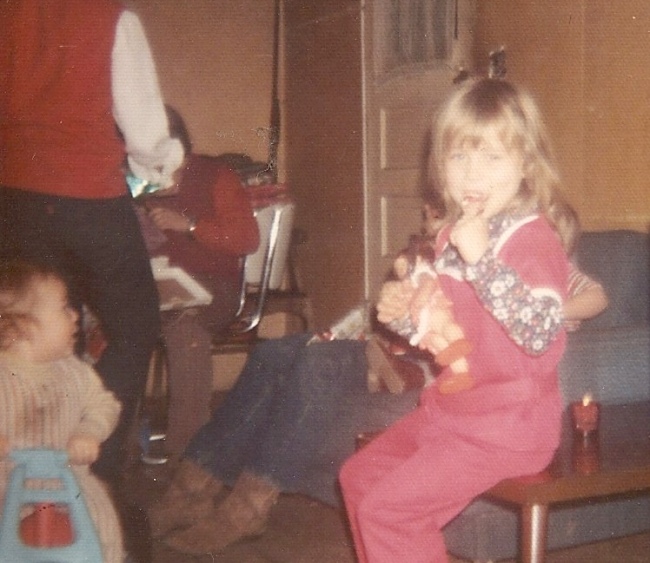 In 1972 my mother had decided to leave my father. She was tired of him not coming home and spending most evenings at the bar. She had warned him a number of times prior but he wasn’t stopping her, wanting to move beyond a life with a bitter wife and three kids. The story involves her smashing the contents of the refrigerator on the kitchen floor and smearing a message on the walls in ketchup. I want to say it was something like, “don’t forget to walk the dog” but somehow, I don’t think that was it. We lived in Veneta, Oregon in a small ranch house on about a quarter acre. The house was stereotypically surrounded by a white picket fence and had a large back yard with a tire swing and a garden. It appeared we were leaving a very normal life. Mom packed up the station wagon with us three kids and a few belongings. My older brother, Jerry had just turned nine, I was five and Jason was just 6 months old.

Our exodus from Veneta was the beginning of our wandering. My siblings and I would continually move from parent to parent while they perpetually moved from place to place. Mom decided to return to her parent’s home in Milltown, Montana, right outside of Missoula. The large two-story house was positioned between the Blackfoot River and railroad tracks. The house did not have indoor plumbing and we used an outhouse behind the house, above the river or, my more male siblings would just easily pee outside the open upstairs window. We would heat up large pans of water on the stove and take baths either in the sink or in large metal tubs placed on the kitchen floor. It was truly a blast from the past. Grandma grew large lilac bushes on the side of the house facing the tracks and even today the beautiful fragrance takes me right back to the age of five, running barefoot during a hot Montana summer at my grandma’s house.

The house was very humble but filled with all sorts of buried treasures, a perfect place for a kid to surreptitiously explore. Jerry and I marveled at the short wave radio we found in an upstairs bedroom and would pretend that we were listening to commanders barking orders to their subordinates in a war we’d heard was happening half way across the world. The walls throughout the house were mostly bare, no paint and very little wall paper. It looked as if someone had started wall papering one wall in a small pink flowered calico pattern and realized how much effort the entire house would take and abruptly quit. The few painting that hung on the walls were modest, the familiar headshot of the blue eyed Americanized Jesus, a cross and a large landscape of a midwestern prairie. A large gas stove kept the house warm in the harsh winters and a lilac tinged draft cooled the house through open windows and doors during the summer.

Like most women of the time, grandma was a stellar cook, baker and canner and a large metal ring carved into in the kitchen floor provided access to a cellar dug into the dirt below. Narrowly spaced and ultra steep wooden steps lead to a cool cellar floor, and once illuminated by a swinging light bulb, the hundreds of glass canning jars lining the numerous shelves built into the earth became apparent. Chokecherry jam, pickles, beets, apple butter, plums, cherries, peaches, and pears. Grandma also had an unforgiving sweet tooth and always fed it with some incredible home baked treat, such as snickerdoodles or a lemon meringue pie of which we were then free to partake as well.

The railroad tracks adjacent to the house were a constant source of entertainment for Jerry and I. To the south, the wooden planks lead us to a small grove of crab apple trees about ½ mile away where we would each gather a hatful of the chartreuse bootie and take it back to the house to enjoy in the appropriate manner, halved with salt. One had to be careful to know their limit on the tart treats as overindulgence would result in convulsive diarrhea. To the immediate north, the tracks became wrapped by a steel bridge that hung over the Blackfoot River.

Standing in the middle to the bridge and waiting until the afternoon train was in sight was one of the many ways Jerry would get his adrenaline fix. The slats were probably eight inches wide and a foot apart. Standing on a wooden plank, one could see the swirling strong river below, a dizzying perspective that could really throw someone off their game. I remember getting caught with him in the middle of the bridge on such an occasion and at the command of the blaring train horn, Jerry demanding that I run.  With the train being at least a mile away, there really was no need to panic, we had plenty of time to get to the edge of the bridge. Unfortunately, logic was no comfort at this moment. I froze, certain that I would slip through the slats into the swirling abstract below. Jerry with panicked eyes yelled at me, “Run Kelli,” but my legs weren’t having it. The train, now in a constant blaring mode, was closing in. Taking a few steps back to grab my arm, Jerry pulled will all his force and my legs suddenly became unglued. Quickly and with a newfound purpose, to live, we approached the edge of the bridge and with seconds to spare, jumped off of the edge into the chokecherry bushes. The engineer continued his angry blaring horn as the train past us, chastising us for being so foolish.

The purpose for staring this blog is threefold, one, to push my personal limits a bit and share my story with others, two, hopefully in doing so, to get a clearer understanding of myself and three, to inspire the youth with similar stories to keep going. My story is weird. I’ve seen the response on people’s faces my entire life. I am fairly guarded on what and how I share with people but I have decided I’m too old give a fuck anymore. As I’ve said, my story is weird, but only parts. Many parts are very normal. Hopefully this blog will allow me to introduce myself in a way that reflects my many angles (and curves) and refuses to let you walk away and peg me as, “the girl who did this” or “the girl who did that”.
View all posts by Kelli K. →
This entry was posted in Early Years and tagged alchoholism, childhood, memoir, raised by wolves. Bookmark the permalink.