The tragic news was all over the TV. Princess Diana was dead in a horrific car crash. Tim and I had been sitting in front of the TV watching the developing story when the phone rang. Jerry, who was staying with us, had gone out to see a band, Goober Patrol, and he was calling from the bar. It was after the show and he and the band were hanging out. The band was from the UK and I could hear the commotion in the background, the band languishing about their princess. Jerry asked if he could bring the band home.

We lived in Santa Barbara for a little over 10 years; in a nice double master duplex that had a huge deck over the garage accessible from each bedroom. We hosted a number of parties on the deck and because we were at the end of a street facing a long canyon, we would play or have bands play often. It was a grand time. Our first roommate moved out after a few years and Tim and I had this great place to ourselves for most of our tenure. The extra master bedroom was a perfect place for guests to come and subsequently we often had family members visit.

It was during this time that my brothers each came to our house as a sanctuary to get clean. Jerry with his wife once and then two more times alone, and Jason twice. We were happy to have them and be able to offer a safe place. Their stays were from a week to up to a month. For the most part I just left them alone and let them be sick in private. When they were ready, I tried to make them food that would be good on their stomachs and get them to as many meetings as they needed. At one meeting Jerry met old friends in bands and a guy that called him “Elvis” as in the surly comment, “and Elvis over here…” because of the TCB patch on his sleeve. Jason met one of my friends from a local band who always after asked of his well-being. 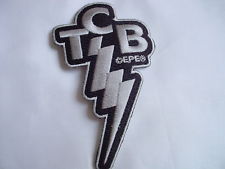 On one occasion, I kicked Jason out because his girlfriend sent him dope through the mail. On one occasion, Jerry left early, within a week of his arrival because a good friend ODed and died back home. On another occasion, Jerry opted to sleep in a tent on the deck because it was so much cooler outside but claimed that a huge raccoon the same size of himself, was stalking him all night. And on this occasion, Jerry was doing very well and was over two weeks clean. I told him to bring the band home. The band was super cool and we were happy to hang out and provide accommodations.

The next day Jerry decided to take the band to what had become his spot in Santa Barbara, Hendry’s Beach. It was a quiet locals beach, free from the flux of tourists and a perfect vantage point to whale watch or see pods of dolphins playing in the surf. The band didn’t have to be in LA until the evening and were happy to spend the day frolicking in the warm southern California water. We threw our collection of boogie boards in the back of the car, picked up burritos at our favorite stand and headed out.

It was another warm day. The sky was bright blue with only slight, wispy clouds on the periphery. At such a late August date, the water was it’s warmest, the waves providing a gentle massage against our summer tans and the milky whiteness of our guests’. Jerry grabbed a board and headed to deeper water. I sat on the beach and watched the ragtag gang of punks plunge into the blue-green waters and play like 12- year-old boys, as our guests followed Jerry out beyond the surf. Laughing, joking, soaking in the warmth of the sun and being completely present. At first, the boogie boards would carry a body to shore on every other wave but the frequency of the bodies diminished over the next hour as the participants tired and opted for a tranquil float instead. This is what Jerry had come to do, what he had been doing for the past two weeks; float weightless atop a boogie board, in the healing warm salt water. Eventually the conversations waned and the rhythmic oscillations of the water caused the bodies to slowly drift apart from each other until each occupied their own plot of the Pacific Ocean.

Over the next few hours the band would wander in and out of the surf, to warm on the blankets spread out on the sand or grab a drink and a snack but Jerry remained in the water. I watched with great pleasure and absorbed the contentment and equanimity on Jerry’s face. He was completely at peace. Being a part of this moment was such a privilege.

After a full afternoon of new friendships, warm water, hot sun and the gentle breeze, we returned to our place so that the band could ready for their next show. I hear Jerry remains friends with the guys of Goober Patrol and as they continued on the rest of their tour for the next weeks, Jerry maintained his place on the boogie board in the warm southern California waters.

The purpose for staring this blog is threefold, one, to push my personal limits a bit and share my story with others, two, hopefully in doing so, to get a clearer understanding of myself and three, to inspire the youth with similar stories to keep going. My story is weird. I’ve seen the response on people’s faces my entire life. I am fairly guarded on what and how I share with people but I have decided I’m too old give a fuck anymore. As I’ve said, my story is weird, but only parts. Many parts are very normal. Hopefully this blog will allow me to introduce myself in a way that reflects my many angles (and curves) and refuses to let you walk away and peg me as, “the girl who did this” or “the girl who did that”.
View all posts by Kelli K. →
This entry was posted in Memoir and tagged Goober Patrol. Bookmark the permalink.

6 Responses to Jerry and Goober Patrol in Santa Barbara

A Good Blog is Hard to Find