Birth order theory attempts to assign particular personality traits to children in a family specifically due to one’s chronological placement in the social structure. Since it’s inception, the theory has been adopted and molded but still remains relevant and fairly intact. The problem with the theory, as it applies to my own family, is that it is rooted in the idea that children will take on particular characteristics when parents behave in a particular manner toward them. The behavior as described, is that of loving, doting and devoted parents. Certainly there are a few characteristics that hold true, but for the most part, the theory completely missed our family.

Generally, the theory proposes that parents give the most energy, love and attention to the first child and because of this, the first takes on certain characteristics mainly, reliability, over-achievement and responsibility. As more children come along the resources including love and attention need to be shared and doled out more sparsely, which lends itself to certain salient characteristics in each child. For example, as a middle child the theory states that I should have received the least amount of attention and will seek out attention elsewhere. Although the effect of the statement may be very true in my case, the cause certainly did not apply. The fact that I was the only girl and that my parents were more prepared by the time influenced the way that they behaved toward me and in turn, affected the traits that I developed. Before the divorce, our family suffered through the growing pains of our parents and after the divorce the complete realignment of the family structure often placed us kids in parental roles. Because the structure was always so fucked up, the idea of birth order theory fell flat on our family.

In June of 1963 my mother was supposed to graduate from high school, but instead the pomp and circumstance was reserved for the arrival of my older brother Jerry Alvin. Consistent with the times, Grandma insisted that the teens marry upon the announcement of their pregnancy and Mom and Dad married in November of her senior year. Dad had graduated the year prior and due to her “condition,” Mom dropped out early. For many girls in 1963, the end goal was the same so the arrival of Jerry only accelerated the jumping over the broom. The photos of the sacred event are sweet but sad, Mom in her light blue Jackie Onassis tweed suit, as Grandma would not allow her to wear the white gown of which she had dreamed. The two are so young and fresh but a Mom looks a little shocked, sporting what we would refer to today as a Xanax induced stare.

Mom tells me Jerry was named after one of my father’s best friends but in my childhood taunts I always insisted that he was named after Jerry Lewis. He was a loving but nervous child, not wanting to leave Mom’s side. Dad was fond of scaring us kids, infants not excluded. Dad thought it was funny; our entire lives, scaring us while we screamed and ran away. It is evident that a bond of trust was never forged between Dad and Jerry due to Dad’s antics and Jerry was particularly sensitive and astute. Dad loved to jump out from behind corners to see Jerry jump out of his skin and run screaming so of course Jerry was wary of Dad from the start. Jerry was a beautiful dark eyed kid who looked just like his father and I think Dad saw so much of himself in Jerry he subconsciously just didn’t like him much. 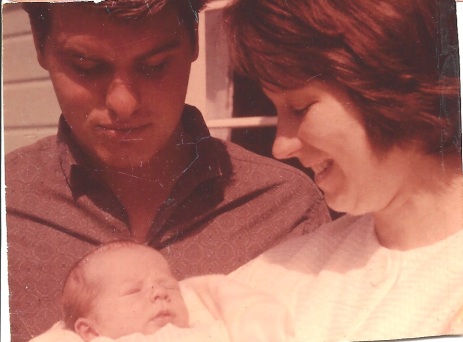 Mom was a nervous mother, and like today, afraid of everything. My husband conveys a story in which he and Mom were the only one’s at home and he accidentally surprised her as he rounded a corner. Mom, he explains, screamed and proclaimed, “Oh Lord! You scared me, I thought you were a bear!” Understand, we live in the suburbs, not wooded suburbs, concrete suburbs. This is the fear in which we were perpetually bathed. Always. The new adventure of motherhood didn’t instill confidence in my mother as she claims to have had little guidance from her own mother and the idea of being responsible for another human being scared the shit out of her. She had plenty of love and truly relished the idea of motherhood but she just couldn’t get past her fear and insecurities. So, Jerry’s arrival was met by an ambivalent, menacing father and a terrified mother, neither of who were anywhere near ready to start a family. The cocktail of these earliest influences left Jerry insecure and nervous. 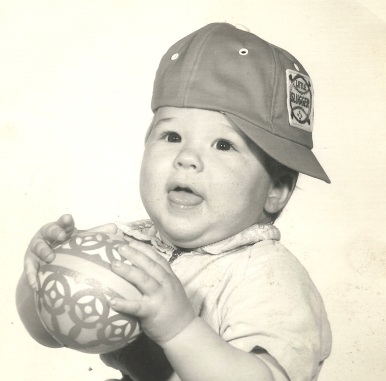 Because Jerry came unexpectedly to a young, unprepared couple, the attention that he received is very different than the loving, doting and devoted behavior described in birth order theory. Mom was very frightened and Dad felt trapped by the circumstances. Although it I am sure that they both loved him, Mom was unable to show her affection freely due to her own insecurities and overwhelming fears and Dad was hindered by both his arrested development and resentment he felt toward Jerry. The result wasn’t the confident over-achiever as proposed by the birth order theory, but rather an insecure young kid who sought love and attention elsewhere. Jerry became a risk taker who always hung out with an older crowd. The drugs and alcohol that came early was a Band-Aid for his fears and the antipathy he felt from Dad. He huffed Pam spray in fourth grade and he learned to blow flames, emulating his idol Gene Simmons, in seventh. It was a path forged early on. 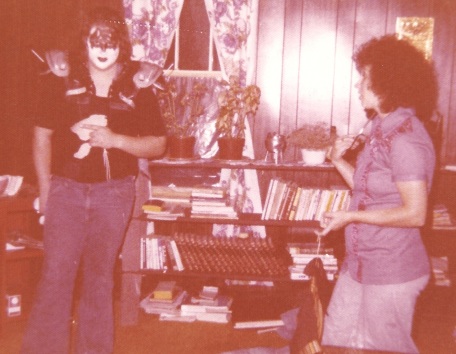 The purpose for staring this blog is threefold, one, to push my personal limits a bit and share my story with others, two, hopefully in doing so, to get a clearer understanding of myself and three, to inspire the youth with similar stories to keep going. My story is weird. I’ve seen the response on people’s faces my entire life. I am fairly guarded on what and how I share with people but I have decided I’m too old give a fuck anymore. As I’ve said, my story is weird, but only parts. Many parts are very normal. Hopefully this blog will allow me to introduce myself in a way that reflects my many angles (and curves) and refuses to let you walk away and peg me as, “the girl who did this” or “the girl who did that”.
View all posts by Kelli K. →
This entry was posted in Early Years and tagged childhood, memoir. Bookmark the permalink.

2 Responses to Birth Order- The First