The clear sky was so out of place for an Oregon spring day. My limited vision sanctioned only one small central circle in the entire cloudless skyscape.  The high frequency waves that made their way through the small opening to my eyes emitted an intense azure color I had never seen before. It was the barely audible distant voices that caused me to focus and realize that the stimulus that was reaching my brain was skewed. I concentrated on the slowly expanding blue disk in the sky as the sound of a high-pitched buzz became louder. Little by little my senses awoke. I realized I was lying on my back in the middle of the playground staring blankly up at a hue that I had never before imagined. I thought for an instant that I must be dreaming but knew that couldn’t be true because I am not one to recognize when I am dreaming. I mean, I can begin to flap my arms in a dream as my feet slowly hover above the ground think, “why have I never thought of this before?” with no sense that it is unusual or out of place.

The sound of the playground slowly came to life, like a familiar song that you can’t quite place, and strong taste of metal filled my mouth. I moved to sit up and but the earth spun and threw me back to the ground.  The high-pitched buzz got louder and I realized it was actually the sound of someone screaming. I surveyed the surroundings from my horizontal position and saw a wailing boy sitting next to me. Again, I fought the inertia and tried to sit up to try and make more sense of what was happening. Although I had never taken such measures before, I attempted to will my synapses to stop mixing up the message and bring me good information that I could understand. Slowly the haze lifted, the buzzing lessened and an astute awareness of a sharp pain in my head turned on like a light. My mind had been taking care of me and allowing only a small amount of the stimulus to reach my brain as the whole package was just painfully unbearable. In an attempt to lessen the painful intake, I fell back to the ground and tried to assess what had happened.

Obviously it was recess, I could hear kids laughing and see running feet off in a distance. From my limited perspective I gathered that I was in the middle of the blacktop underneath the bars and not much else was going on around me, the wailing boy and I appeared to be on our own. The bars…. slowly the edges began to sharpen and the picture became clearer. I remember that I had been attempting the epic cherry drop. I had recently seen a Wonder Woman special on TV and was enamored with this image of a strong female getting shit done and decided that that was what I wanted to be when I grew up. I had inventoried my strengths and realized I already had a lot going for me; I was fast, had incredible empathy toward animals and could spin around in circles like no one’s business but I knew I had to develop my flying skills. Thus the epic cherry drop became my daily focus. 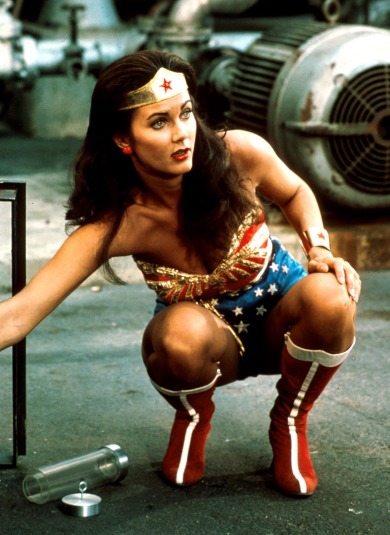 To move into “epic” category, one had to aspire higher than the normal cherry drop where one merely falls backward from a sitting position atop the bars to a standing position below. It was imperative that flight be a factor and that maximum height be reached before one’s feet touched the ground. I envisioned that eventually I could add a flip before my feet touched the ground and this would be my trademark. The masked man would master a similar move year’s later in The Princess Bride. The height of my flight and distance of my plant had been increasing lately and I came to realize that neither was directly tied to my abilities but rather to my confidence.  I would later learn that this applied to most things in life.

Moments earlier, I had let all reservations vanish as I fell into high momentum swing from atop the bars. Unbeknownst to me the young boy was making his way across the blacktop toward the fields at the exact moment and decided that the fastest route was under the bars, directly through my fly zone. Like a ball getting hit out of the ballpark our heads met in the middle, the moment heightened by the same loud “crack” that announces a home run hit. Years later I would learn in a physics class that when two trains collide the momentum is transferred to the colliding bodies. In this case our heads were the colliding bodies. The back of my skull absorbed the energy from the high impact collision and transferred it to my brain. My brain was sent hurling to the front of my skull, which in turn stopped my brain from hurling any further and its impact against the frontal bone sent shock waves through my gray matter. Nerve fibers were torn and stretched along the trajectory, as it is the tearing of nerve fibers in one’s brain that results in loss of consciousness. If one head was moving at 100 mph and the other at 90 mph, when would the two meet up in Phoenix?

I’m not sure how long I laid on the blacktop staring at the remarkable azure sky but it was long enough to realize that no one was coming to my rescue. The boy had taken off to find help for himself but I was still too dizzy to move. As I consider all of the similar incidents in my childhood, I sometimes find it surprising that I am able to finish a sentence; the skateboard incident on Suicide Hill, the time I tried to “log roll” a cement cylinder down a concrete slope, another lights out episode from my high speed bike careening into the back of our parked car, the BB embedded an inch below my eye in my fleshy cheek, electrical socket fiascos, the ice breaking over a frozen river and of course the gas oven blowing me across the room. This is, I assure you, a condensed list. I am always quick to say a prayer of thanks and another for the safety of my own kids. May my own have many fewer, much more boring stories to tell.

The purpose for staring this blog is threefold, one, to push my personal limits a bit and share my story with others, two, hopefully in doing so, to get a clearer understanding of myself and three, to inspire the youth with similar stories to keep going. My story is weird. I’ve seen the response on people’s faces my entire life. I am fairly guarded on what and how I share with people but I have decided I’m too old give a fuck anymore. As I’ve said, my story is weird, but only parts. Many parts are very normal. Hopefully this blog will allow me to introduce myself in a way that reflects my many angles (and curves) and refuses to let you walk away and peg me as, “the girl who did this” or “the girl who did that”.
View all posts by Kelli K. →
This entry was posted in 3rd Grade- Eugene, OR and tagged childhood, memoir. Bookmark the permalink.

2 Responses to The Epic Cherry Drop